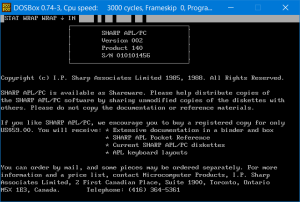 SHARP APL was an APL implementation offered by I.P. Sharp Associates (IPSA), originally as part of its time-sharing service and later as a stand-alone product. It was split off from STSC's APL*PLUS, which until then had been sold jointly by the two companies. SHARP APL was the source of many developments in flat array theory, driven by Ken Iverson and other APL designers at IPSA.

All scalar functions have rank zero.

SATN-40 describes the addition of complex numbers to SHARP APL.

Features of SHARP APL were documented in "technical notes" issued by IPSA. These notes are numbered following the scheme "SATN-0". Earlier notes typically had no author listed. A pdf collection of SHARP APL Technical Notes is hosted at jsoftware.com, as are html transcriptions of some notes, linked in the table below.