APL\360 (stylised as APL\360) was the first implementation of APL using recognizable APL symbols. It ran on the IBM System/360, and was completed in November 1966 though at that time remained in use only within IBM. In 1973 its implementers, Larry Breed, Dick Lathwell and Roger Moore, were awarded the Grace Murray Hopper Award from the Association for Computing Machinery (ACM). It was given "for their work in the design and implementation of APL\360, setting new standards in simplicity, efficiency, reliability and response time for interactive systems."

Beginning in 1975, the IBM 5100 line of microcomputers offered APL\360 as one of two built-in ROM-based interpreted languages for the computer, complete with a keyboard and display that supported all the special symbols used in the language.

Significant developments to APL\360 included CMS/APL, which made use of the virtual storage capabilities of CMS, and APL.SV, which introduced shared variables, system variables and system functions. It was subsequently ported to the IBM System/370 and VSPC platforms until its final release in 1983, after which it was replaced by APL2. 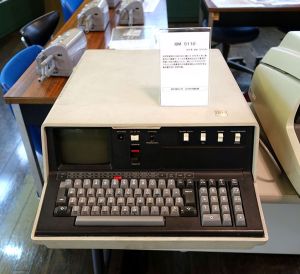 APL\360's implementation was completed in 1966, and it was made available within IBM from the Watson Research Center lab in Yorktown Heights starting in November. From the beginning it was an interactive rather than a batch system, with programmers working directly from a terminal rather than submitting jobs to be run. It was generally available only for IBM projects, with IBM's emphasis on PL/I blocking its release as a standalone product, but was used in a few external projects including a 20-person class at NASA's Goddard Space Flight Center, and at the University of Alberta.[1] Syracuse University also connected a terminal to Yorktown Heights starting in late 1967.[2] In this period SUNY Binghamton became the first facility outside IBM to have APL installed, due to its connection with IBM-Endicott.[3]

IBM released APL\360 in August 1968 (APL\1130 had been released that spring)[4] as a Type-III or unsupported library. In 1969 it was offered as one of IBM's first program products, initially for DOS/360, and next with support for MVT.[5] These products were primarily used by universities, but also rapidly produced interest in time-sharing APL, with at least eight companies offering time-sharing in 1968. Business use of APL\360 was limited by its lack of support for reading and writing files, a problem that would only be addressed in IBM products with APL.SV in 1973. Many companies instead used a derivative system such as APL*PLUS modified to support files.[6]

APL\360 evolved rapidly during its early development within IBM and more slowly as it became available to outside users. Here we show the primitives described in its documentation in 1968 when it was first released as a stand-alone product (a Type-III Library). Later additions include Matrix Inverse and Matrix Divide; Execute, Format, and Scan introduced by APL.SV; and an axis and Laminate form for the Catenate function.