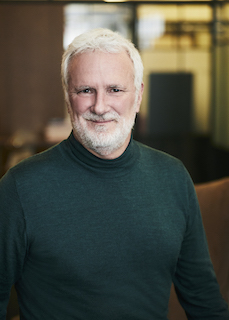 Arthur Taylor Whitney (born October 24, 1957) is the designer of A, A+, the K family of languages, and Q, and cofounder of Kx Systems. Whitney was a major figure in the development of leading axis theory and an influence on J's early development.

Whitney was first introduced to APL, and to programming, by Ken Iverson, who was a friend of his father. In 1969, when Whitney was 11, Iverson demonstrated an interactive APL session for him. Although Whitney was introduced to other programming languages in university (starting in 1974), he studied mathematics, focusing on set theory and foundations of mathematics[1], and his APL work was limited to a few summer consulting jobs.[2]

Whitney worked at I.P. Sharp Associates in the early 1980s alongside Ken Iverson and Roger Hui. In 1982 he is credited with inventing the Rank operator while travelling to APL82.[3][4] He left Sharp to complete a graduate degree in mathematics from the University of Toronto, and subsequently worked for Stanford University. In this period Whitney was heavily invested in the design and implementation of interpreted programming languages, including not only array languages but also functional, logic, and object-oriented languages. His work at Stanford included a Prolog-style inference engine intended for AI programming.[2]

After leaving Stanford and working briefly at an AI company called Teknowledge, Whitney joined Morgan Stanley where he created the cut-down and speed-oriented APL dialect A.[5] In 1988 he extended this language to create A+, working alongside other Morgan Stanley employees.[6] A and A+ were intended for use with time-series data, a focus that would continue with K.

In 1989 Ken Iverson approached Whitney about his plans for a new array language, which would become J. Whitney wrote a one-page prototype for the language in a single afternoon using C, which served as an inspiration for Roger Hui when he implemented J.[7] Whitney suggested several features that would become part of J, such as prefix agreement[3], the Rank operator, and Tally.

In 1992, Whitney created the first of a series of languages called K. K marked a major departure from APL tradition and towards LISP influence[8], since it discarded APL's multidimensional array model in favor of nested lists or vectors, and it also used ASCII symbols rather than traditional APL ones. He left Morgan Stanley and co-founded Kx Systems with CEO Janet Lustgarten in 1993 to sell the language.[9] K was developed along with the database system kdb. Initially under exclusive contract with the Union Bank of Switzerland, K and kdb later became widely used in banks.

Whitney developed K through K6 while at Kx Systems, as well as the databases kdb and Kdb+. In 2004 he created the language Q based on K4, using English words rather than ASCII symbols for primitive functions.[10] After the creation of Q, K5 and K6 were developed in relative obscurity as banks continued to use K4 or Q. Whitney also began work on kOS, an operating system written in K, while at Kx.

In 2014 a majority stake in Kx Systems was sold to First Derivatives, and in 2018 Whitney and Lustgarten sold their remaining shares in the company, giving First Derivatives complete ownership.[11] The pair then founded Shakti Software, selling a database system based on K7.