Partition, Partitioned Enclose, the Cut operator, and Cut (K) all allow a programmer to split a vector into differently sized pieces. The left argument to these operations defines the structure of the partition. This article discusses possible ways partitions can be represented, using index origin 0 throughout.

In this page, a partition of a vector is defined to be a non-empty nested or boxed vector containing vectors, such that the Raze (or equivalently {⊃⍪/⍵} in nested APLs) of the partition intolerantly matches the original vector. A partition contains all the original elements of the vector, in the same order, but at one greater depth.

The division endpoints are another way to represent partitions. The endpoints +\l computed above form a non-decreasing vector of non-negative integers whose last element is equal to the length of the partitioned vector. It would also be possible to use the partition starting points +\¯1↓0,l; here we use only endpoints for consistency. The latter representation matches K's Cut function, which produces a complete partition exactly when the left argument contains a zero (otherwise, some initial elements are omitted).

Existing APLs rarely define partitioning functions using properties of the resulting divisions. Instead, most partition functions use a vector of the same length as the partitioned vector to control how it is partitioned. For example, Partitioned Enclose starts a new division whenever a 1 is encountered in the Boolean left argument:

The division-based and divider-based representations are dual to one another: counting the number of elements with no divisions in between and the number of dividers with no elements in between are symmetric concepts. We can convert between them using the Indices primitive and its inverse. The following diagram shows the relationships between the four representations. Note the symmetry in the graphs for target indices and division endpoints: the graphs are essentially transposes of one another. The Interval Index function can be used to convert between these two representations directly. 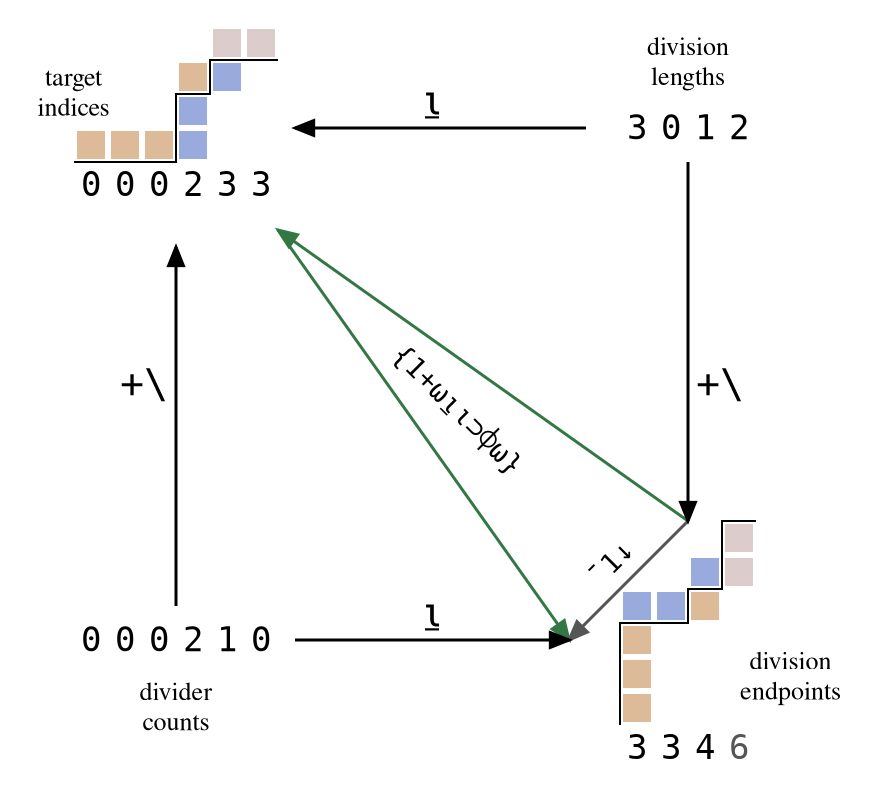 Another grouping appears when considering how values are indicated. The divider counts and division lengths are counts, while the target indices and division endpoints are indices. This difference is reflected in the domains of these representations: while counts are allowed to be any vector of non-negative integers, indices must additionally be non-decreasing.

Because it interleaves elements from a vector with dividers, partitioning is closely related to the Mesh operation. In fact, a partition can be used to produce a mesh by prepending an element to each division and Razeing:

A partition can also be extracted from the mesh using the Cut operator and the mesh vector. In J:

The Boolean control vector used by Mesh serves as another way to represent partitions. Unlike the case with Partitioned Enclose, a Boolean vector here is sufficient to represent any partition including those with empty divisions. This is possible because of the vector's increased length: while Partitioned Enclose uses only one Boolean for each element in the partitioned vector, the mesh vector has a 1 for each element in the partitioned vector as well as a 0 for each divider.

The mesh vector can be obtained from the other representations. In the diagram above, it contains a 1 for each horizontal line segment in the target indices graph, and a 0 for each vertical one. The directions are reversed for division endpoints.