The problem of finding convex hulls finds its practical applications in pattern recognition, digital image processing, statistics and geographic information systems. It also serves as a tool, a building block for a number of other computational-geometric algorithms. This page describes and implements an algorithm for computing a convex hull in R2.

In a Euclidean Space the Convex Hull of a set I is defined as the intersection of all convex sets containing I.

For planar objects, i.e., lying in the plane R2, the convex hull may be easily visualized by imagining an elastic band stretched open to encompass the given object; when released, it will assume the shape of the required convex hull. 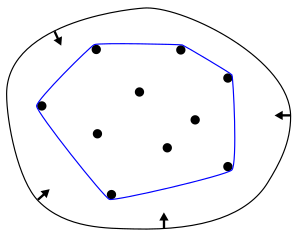 If the set I is a set of points in R2, then the convex hull is the smallest convex polygon which encloses I.

Many convex hull algorithms had been proposed for finding the points lying on the convex polygon.

Here a dfn is presented that implements a gift wrapping algorithm.

It follows a suggestion from Lars Strand, written in an email to programming@jsoftware.com at Jan 11, 2008.

A number of points in R2 are given. The problem is to determine the smallest convex region which includes all of the points.

Three points in the solution are now determined.

The procedure is repeated after a shift of p1 to p0, p2 to p1, and a new point p2 is found in the same way.

The procedure stops when the new point p2 is the same as the starting point.

The solution contains the coordinates of the points of the hull.

This dfn calls another dfn for computing the polar phase of all points with respect of a previously chosen point lying on the hull.

The iteration is implemented by means of primitive power operator.